The Decision Process, Part 1
By Douglas G. Davidoff
May 2004

Recently, I bought a gym membership.  I spoke with the salesperson at length about her business and the sales consulting that I do.  She mentioned that she didn’t really think of herself as a salesperson and that she liked selling gym memberships because “it really does good, and it’s not like selling used cars.”  A friend of mine, who is a very successful salesperson, echoed a similar sentiment at dinner one night.  He told me that he didn’t feel like he was still a salesperson because he no longer “pushed” things on people.

I’ve had many conversations over the years on the subject of selling, but I found these two especially poignant because they typify a problem prevalent in the sales profession.  Despite their self-descriptions to the contrary, these two people are in the sales profession—one new to it and the other a successful veteran.  Unfortunately, both of them associate selling with pushing. When I consult with salespeople I tell them that if they feel like are selling, they are probably doing something wrong.  No matter how successful or advanced a business’ sales efforts are, they are still hindered by what many people, including their salespeople, think of as selling: the pushing of unwanted solutions on an unsuspecting public.

This issue of The Third Wave Selling™ E-Zine will introduce a new concept of selling that we call The Decision Process™.  We will explain what The Decision Process is, how this process differs from the way most selling organizations manage the sales process, and why having a decision process will provide you and your company with the greatest leverage in improving your sales results.  Next month’s issue will outline how The Decision Process can work within your organization and will provide examples that demonstrate how implementing such a system can cut your pipeline time.

Let’s return to our question: what is selling?  Imagine Consulting defines selling as:  the professional process that enables two or more parties to reach a mutually beneficial result.  There are three key components to this definition.  First, selling is a process.  It is a series of actions, not just one act.  Second, the process results in something that mutually benefits the parties involved.  Either it is win–win or there is no deal.  Third, the process is professional, meaning that it conforms to some standard.  This doesn’t mean that there is no room for individuality or creativity, but rather that there is discipline to the process. It is critical that businesses have a clearly articulated decision process for salespeople and customers, with the ability to document the progress of both seller and buyer.  It is in the third part of the definition that most sales forces are weakest and where the most dramatic improvements to best results can be made.

Tom Hopkins, Brian Tracy and Zig Ziglar (as well as other advocates of  “old school” sales) talk about the seven or so steps involved in a selling process.  Because most of these processes are designed from the seller’s point of view only, they do not deal effectively with the level of sophistication that exists in today’s buyers. Consequently, the value of these selling processes is limited, and, because they do not take into consideration the buyer’s concerns, they have become notorious for creating the sense of “pushing” discussed at the beginning of this article.

As information became ubiquitous in the era that Alvin Toffler refers to as the Third Wave, the interest in many traditional selling processes diminished.  New schools of selling emerged.  One flipped the old school thinking on its head by advocating a buying process that aligns points of the sale with the considerations a buyer makes.   Neil Rackham’s SPIN SELLING program and Michael Bosworth’s book, Solution Selling, both represent this school.  While it addressed the buyer in a more structured and disciplined way, it still only looked at the sale from one party’s perspective.  This approach continues to be one-sided, skewing the focus of the salesperson and leading to less than optimum results.

THE DECISION PROCESS VS. SELLING/BUYING PROCESSES

Imagine Consulting advocates The Decision Process, a professional sales process for buyers and sellers that empowers salespeople to become value creators instead of merely value communicators; it enables companies to improve their best results and produces a win-win outcome.  The Decision Process differs from “selling” or “buying” processes in several ways.  It provides a methodology to differentiate prospects with a more accurate measure than either of the traditional methods provide.  The Decision Process, properly implemented, transforms your pipeline from an opaque mystery to a transparent and accurate forecasting tool.  And because the decision process is based, in part, upon the logical progression of decisions the buyer goes through, it serves as a guide to the salesperson, as well.

Traditional sales methods often view potential customer as prospects until they buy something, at which point they become clients.  The “prospect/client” approach is a binary system and makes little to no delineation between a prospect who has just begun the purchasing process and one nearing a decision, nor does it distinguish between prospects who are highly likely to buy and those who are not.  When the Sales Department views their business with a prospect/client approach, the pipeline lacks transparency, the single greatest challenge to managing an effective business development effort.

To remedy this, many sales departments have added some form of gate system to their pipeline process.  These gates categorize prospects according to where they are in the “selling” process or the “buying” process.  While these gate systems offer a clear improvement over binary systems, they still lack the effective structure needed to improve your best results.  The decision process enables the salesperson to know with more clarity and confidence what the next action should be, and when the right time to ask for the sale is.  This leads to faster pipeline times and higher margins because price concessions are no longer needed to make up for poor communication.

There is no activity that you could undertake that would provide more sustained benefit to your selling efforts than mapping a decision process for your business.  This means identifying, articulating, and documenting the various stages your salespeople go through as they present your products or services and doing the same for the stages your customers go through as they analyze those services and products and make the decision to buy or not.  Furthermore, this means listing those stages in the order they occur.  The mere act of documenting the decision stages will have a dramatic increase in the productivity of your sales efforts and will shorten the time it takes to train a new salesperson successfully.
You should know that articulating this process will be one of the most difficult tasks you will undertake in your business.  If it isn’t, you are probably doing something wrong.  But creating your map is critical to the long-term health of your sales efforts.  If you would like to make the process a little less painful and more effective, Imagine Consulting is available to help.  Just call or e-mail us.

The Decision Process fully meets the definition of selling that we provided at the beginning of this e-zine: a professional process positioning both parties to make a mutually beneficial decision, win-win or no deal.  It is important to note that we are not talking semantics here.  The Decision Process is not just window dressing for traditional sales systems.  It is a paradigm shift.  It means looking at the sale from both the buyers’ and the sellers’ perspectives.  It means managing the sales cycle in a disciplined manner.  The Decision Process is the linchpin of Third Wave Selling.  It is a unique selling system that is positioned to combat the challenges of commoditization that today’s economy presents.  It creates value not only for the selling companies, but for the buyers, as well.  If your business is looking to improve your best results, look no further and begin to develop your own Decision Process.

The next issue of The Third Wave Selling E-Zine will introduce the steps you can take to develop an effective decision process within your company. 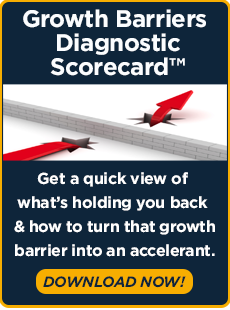 Imagine is rewriting the standard for marketing and sales. Our processes are designed for the way modern consumers buy goods and services, not the way “it’s always been done.” Customers come to us for our innovative approach and proven success with inbound marketing.